A cigarette and chewing gum vendor scrambles outside a nightclub in Ikoyi, Lagos, on July 23, 2022. AFP

LAGOS — It’s midnight. Luxury cars pull up outside Cocoon, a nightclub in Lagos, Nigeria’s biggest and busiest city. Within minutes, dozens of people surrounded the vehicles, hoping to make money.

In the wealthy district of Ikoyi, the flow of people looking for money never stops. All of them survive thanks to the informal jobs they find daily on the streets.

For a handful of dollars, they help people park in front of expensive restaurants, bars and clubs and help manage traffic during the day.

In the megalopolis of some 20 million inhabitants, for the poorest, a good day is when you have enough to eat. A bad day is when you don’t – and such days are becoming more common as high fuel and food costs weigh on revenue.

“In Nigeria, it’s simple. Either you hustle or you die. So even 100 naira (25 cents), we take it, ”says Musa Omar, standing in front of the Cocoon nightclub.

Africa’s most populous country has some 80 million people living below the national poverty line, earning less than $1.90 a day.

And in rural Nigeria, millions of people live in areas where insecurity is rampant, making living conditions even more difficult.

Many are now being pushed to a tipping point, after the cost of living and food prices rose in the wake of the coronavirus pandemic, and then again after Russia declared war on Ukraine.

Nigeria’s official year-on-year inflation is now 18%, with food inflation at 20%, a five-year high.

In Lagos, hustlers – people living and working for the day – can be seen around every corner.

They embody one of the city’s mottos often seen painted in colorful letters on trucks: “No food for the lazy”.

The street is like a river, and they desperately hope to catch a passing fish.

“I’m ready to work anywhere, do anything, earn a decent living,” said Omar, 36.

“Before, it was not like that… prices have gone up, everything is expensive and everyone is suffering.” 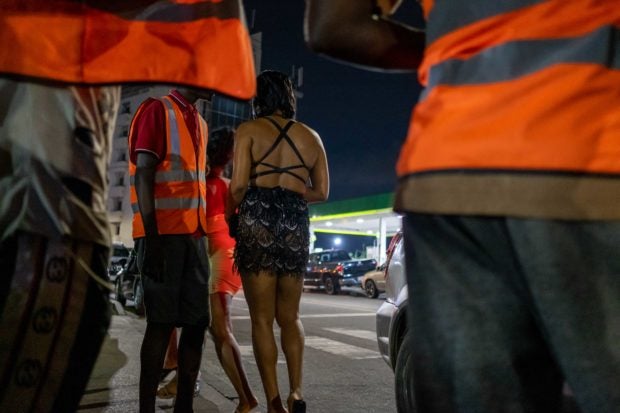 Every day, thousands of mostly young people flock to the cities and especially to Lagos, hoping to capture a small fraction of the immense wealth concentrated in the hands of a privileged few.

This is the case of Kasheem Sadiq who left Kaduna, in the north, after the death of his baby, Yusuf, who “fell sick”.

“I had to find 9,000 naira (about $20) to pay for the treatment, but I couldn’t because the price of food went up. And there is no work anywhere,” the 44-year-old said, standing under the only working light on a dark Lagos street.

Now working in Lagos, he says he earns around 2,500 naira ($6) a day – almost three times what half the population earns – but “every night I cry, away from my family”, did he declare.

It is now 2:20 a.m. in front of the Cocoon nightclub. Someone in a Porsche tries to park while a group of hustlers guide the driver from crashing the luxury car into a ditch full of trash.

“The rich are getting so rich and nobody cares about the poor,” says Abdul Musa, 35, who appears to be the informal ringleader of the scammers. “Only God can help us.” 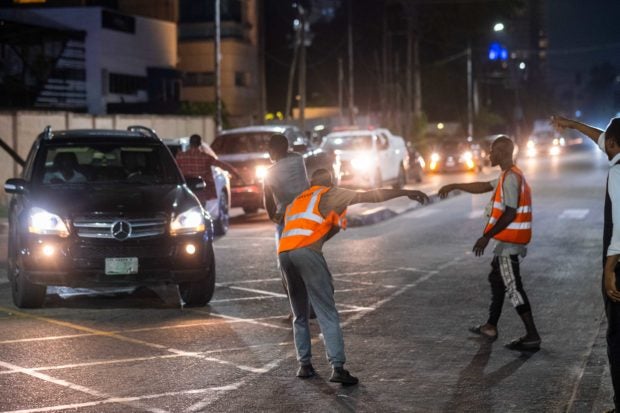 Scammers direct customers to a parking space outside a nightclub in Ikoyi, Lagos, on July 23, 2022. AFP

From Benue in the east, Musa has worked the streets of Ikoyi for five years. He says he sleeps in a stable at night with donkeys.

“I don’t want to have children,” he says. In this country, “we survive in hell”.

Five o’clock in the morning, the Clubbers leave en masse, returning to their cars.

It’s late, or early, but someone shouting the following three syllables is enough to wake up the crowd: “Bu-ha-ri”, in reference to President Muhammadu Buhari.

The 79-year-old former army general is stepping down next year after serving his constitutionally permitted two terms.

For many, including those waiting outside Cocoon, the government is “corrupt” and “does nothing for the people”.

Anita Obasi, the only woman in the group of scammers, watches the stream of cars drive away while smoking a joint.

In Nigeria, drugs are widely used among street hustlers as a means of escaping reality.

Wearing a black cap, the young man of 24 years smiles. She says that smoking “reduces the pain”.

For the past two years, she has worked as a prostitute, charging the equivalent of $9 per client or $11 when she visits their home.

After two decades of growth, Nigeria entered a recession in 2016, after a fall in oil prices. The economy was just beginning to recover in 2020 when the pandemic hit. And the war in Ukraine made everything worse.

Obasi lives in constant anguish: will she be able to feed her daughter at the end of the day?

“I try to think on the bright side, but everything around me is falling apart.”

Lagos in Nigeria risks another lockdown if social distancing is flouted

Survivors of church attack in Nigeria scramble for medical supplies